A couple of days ago we made a dashcam video of a little driving trip we took to go shopping and run errands in and around Grecia.
We left home and drove Hwy. 107 to Grecia then on to Masxmenos (a supermarket chain owned by Walmart) for some groceries. Back to Grecia to the DHL office to pick up a courier envelope, then to the Banco Nacional utility payment location to pay our asada (water bill). This is located on Av. Centra Leon Cortes Castro, across from the bank itself.
Last stop was Super Rosvil - Liceo for more groceries and then home.
Some people may find it interesting to see what Grecia looks like on a weekend with all the vehicles on the streets and people going about their weekly shopping. Wondering why we pass the church and park so many times? It’s because of all the one way streets!
Here’s our route to Masxmenos from our home and back again: 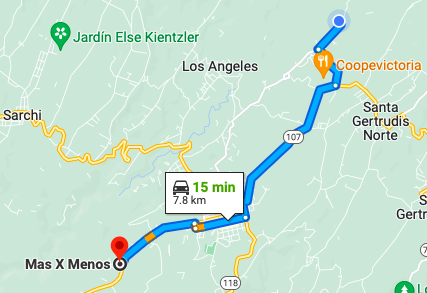 Here is my YouTube video:
The date and time on the video is incorrect - we have not yet set up those parameters on the camera.
Posted by Diana Miskell at 12:47 PM No comments:

During July, visits to this blog were received from the following 10 countries and Hong Kong: 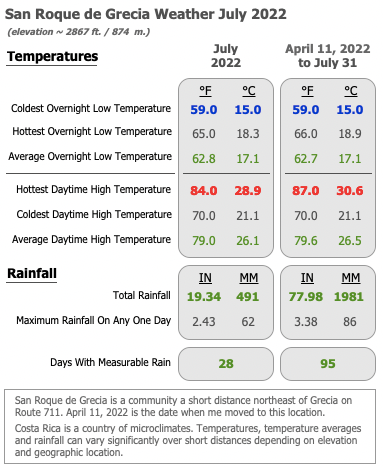 At the beginning of July, tropical storm warnings from the Caribbean had been issued for much of Costa Rica. However, while it ended up tracking across northern Costa Rica and southern Nicaragua to the Pacific, the only effect on us was a dreary 24 hours or so of drizzling rain with minimal winds.
There was at least some rain almost every day in July. However, on many of these days the amount was rather trivial. Most days were marked by sunny or partly sunny mornings - then some rain - then lingering cloud. On 6 days there were downpours contributing to over 60% of the total rainfall for the month.
_____________________________________________
Covid-19 Update

The following table updates information which appeared in my blog entry posted on July 6, 2022:

The column headed "Death Rate Trend" is new. For each country, it will indicate whether the Covid situation appears to be improving (death rate "Falling"), getting worse (death rate "Rising") or is unchanged ("No Change") since the last time a report was made on this blog. Thankfully, the death rate has fallen in all three countries since my last post on the topic. More specifically, it fell by 0.08% in Costa Rica, 0.01% in Canada, and 0.02% in the United States. So, survivability is improving.
If you want to see how some other country is doing in comparison to Costa Rica, then visit the website of Worldometer. Numbers for populations, reported cases and reported deaths can be obtained from that site. All that is then needed is some simple math to calculate the percentage death rate for the other country and the death rate in that country compared to Costa Rica.

**This time around, the foregoing is not completely accurate for the United States. At least between August 1 and August 8 Worldometer was inexplicably not reporting on its Covid web page the numbers for U.S. population, cases per million, or deaths per million. But it did report total cases (93,910,150) and total deaths (1,058,738). Also, on a web page unrelated to Covid, it reported the U.S. population as of August 8 (335,122,642). With these numbers in hand, it was trivial to calculate cases per million and deaths per million for purposes of the above table.
Click on images to enlarge.
Posted by Diana Miskell at 1:01 PM No comments:

Yesterday, Saturday, Lance suggested we have lunch at Victoria Cafeteria which we had yet to try. As you can see from the map below, it is very close to where we live. 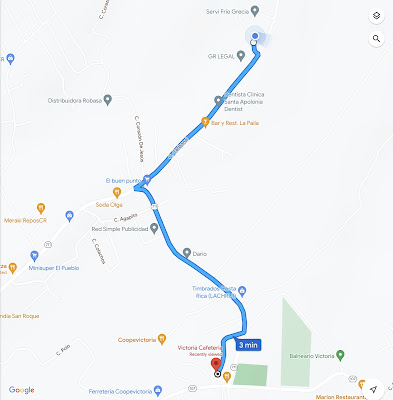 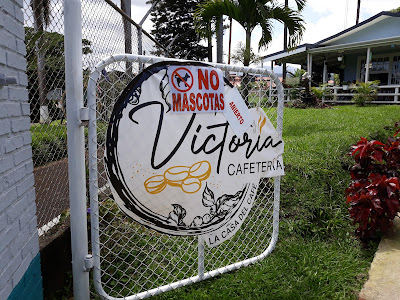 Victoria Cafeteria is in a charming wooden building with covered porches on two sides. Lots of flowers on the grounds and in and around the porches. It is located next to Coopevictoria, the huge coffee and sugar cane processing plant. 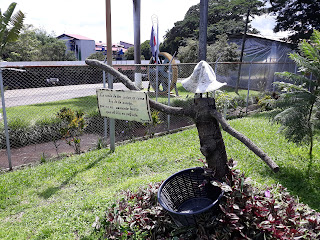 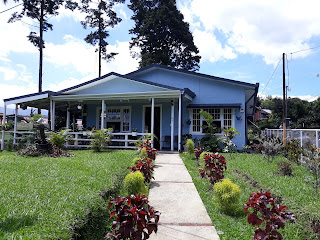 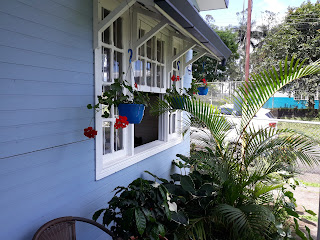 A couple of views of the Coopevictoria plant next door - that is some huge gear on display: 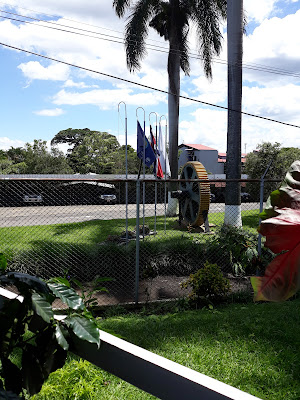 We can’t figure out what those four big “things” are in the background: 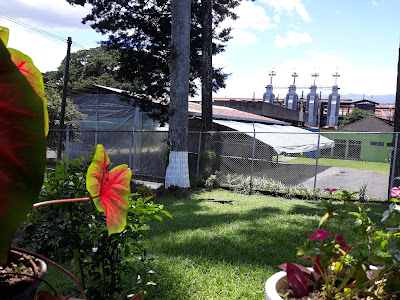 Lots of items to choose from the menu. For drinks, we both ordered mora with milk. They were really large. 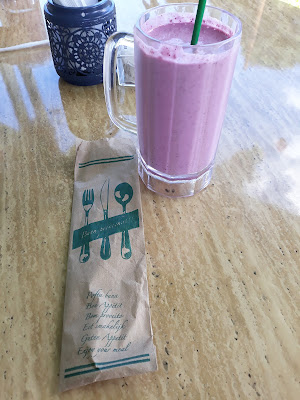 Lance’s lunch choice was arroz con camarones/shrimp with rice. The rice was loaded with shrimp. 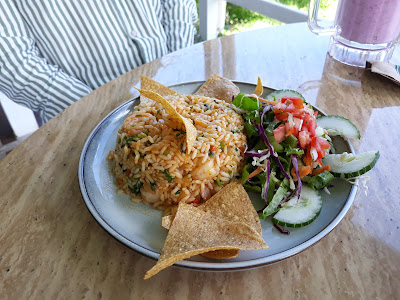 And for me, it was the casado Tico with cerdo (pork): 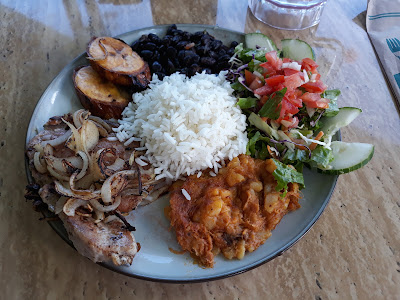 From left to right clockwise: pork with grilled onions, plantains, black beans, mixed salad, picadillo de papa and white rice in the centre.
The portions are huge and neither of us could finish our rice and beans.
This restaurant is in a lovely setting, with quick service and friendly people. Highly recommend.
Click on images to enlarge.
Posted by Diana Miskell at 2:33 PM 2 comments:

I recently read an article in the Tico Times about a cheese making enterprise in Santa Cruz de Turrialba. The business is called Le Chaudron Artesanal and what caught my attention was one of the cheeses they make - raclette.
We first tasted raclette at the Swiss pavilion at Expo ‘86 in Vancouver, British Columbia, Canada.  We enjoyed it so much that we would buy the cheese and have our own raclette meal. We even had an electric tabletop grill designed especially for serving raclette.
Le Chaudron is selling their cheeses at the Auto Mercados, at El Mercadito Azul in Cartago and at the Feria Verde in Aranjuez, San José. We decided to drive to the Auto Mercado in Alajuela to see what varieties of cheese Le Chaudron had there.
Alas, no raclette but we did buy their Petit Blanc Cebollino (green onion) and it was tasty. 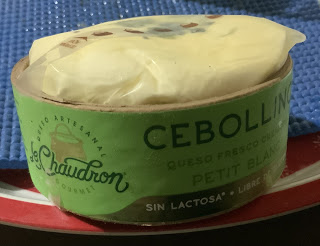 I will keep watching for this brand of cheese goodness. After shopping at Auto Mercado, we drove to Price Smart in Alajuela and picked up a big block of cheddar, some fresh asparagus and mini frozen egg rolls.
We made a dashcam video of our drive to Auto Mercado and back home.
The dates on the video are incorrect - we forgot to change the settings.
Click on images to enlarge.

Posted by Diana Miskell at 11:29 AM No comments:

During June, visits to this blog were received from the following 9 countries: 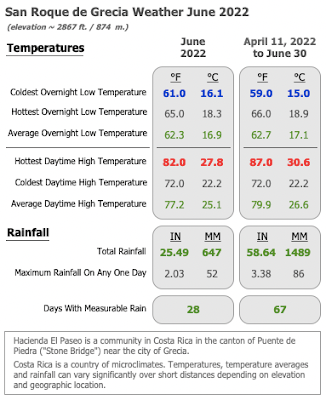 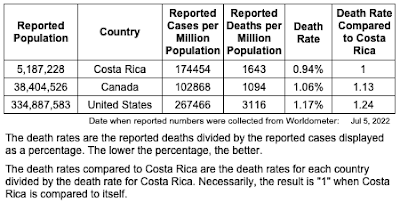 Since my last post, the death rate in the United States is down 0.03%. That in Canada and Costa Rica remains unchanged.If you want to see how some other country is doing in comparison to Costa Rica, then visit the website of Worldometer. Numbers for populations, reported cases and reported deaths can be obtained from that site. All that is then needed is some simple math to calculate the percentage death rate for the other country and the death rate in that country compared to Costa Rica.
Click on images to enlarge.
Posted by Diana Miskell at 12:13 PM No comments:

This past Sunday, June 12th, we drove from our house in San Roque de Grecia to San José to have dim sum at Casa China.
We have previously eaten dim sum at this restaurant and I did a blog post on it here.
This Sunday, we were treated to a stage show of dancers and music. I made a short video:
This venue is typical of the dim sum restaurants we were accustomed to when we lived in Vancouver, British Columbia, and when we would go for dim sum in Richmond, B.C. Large open space with tables big enough for families to sit at.
As is typical in dim sum restaurants, carts were rolled around with the prepared offerings and we could select what we wanted. Everything was very good.
Since we were going to San Jose, I wanted to combine dim sum with shopping at an Asian grocery store that came highly recommended. That would be Super Asia in the Tibas area of San Jose. They are open on Sundays. Here is what I bought: 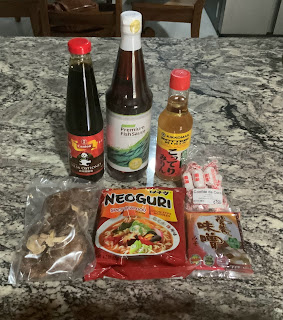 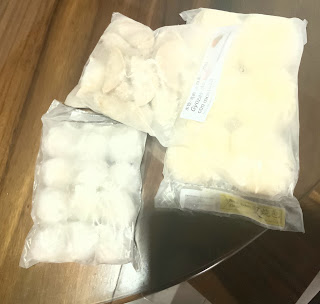 Note: we needed to use the Waze app numerous times to navigate where we wanted to go. It takes two people … the driver to listen to the instructions and the passenger to watch the on line instructions on what road to turn into next. Also BEWARE there are many serious potholes on some of these roads between Casa China and Super Asia.
Click on images to enlarge.

Posted by Diana Miskell at 3:52 PM No comments:

During May, visits to this blog were received from the following 7 countries: 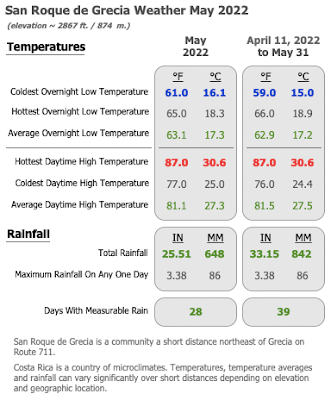 Compared to May 2021 when we lived in Hacienda El Paseo (a short distance southwest of Grecia), the average overnight low temperature in San Roque was about 1.5°F (0.83°C) lower. Somewhat surprisingly and despite being at a significantly higher altitude the average daytime high in San Roque was virtually the same as last year in Hacienda El Paseo.

Rainfall comparisons are a different matter. For us, 25.51 inches (648 mm) in a single month is a record for any month of any year in any place where we have lived and kept records in Costa Rica (firstly Vista Atenas; secondly Hacienda El Paseo; and now San Roque). Also, we have never before encountered 28 days of rain in a single month.

The following table updates information which appeared in my blog entry posted on May 6, 2022: 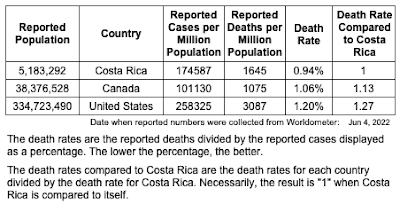 If you want to see how some other country is doing in comparison to Costa Rica, then visit the website of Worldometer. Numbers for populations, reported cases and reported deaths can be obtained from that site. All that is then needed is some simple math to calculate the percentage death rate for the other country and the death rate in that country compared to Costa Rica.

If you want more up to date information and statistics on the situation in Costa Rica, including various locales in Costa Rica, then the web site of the Costa Rican Ministry of Health ("Ministerio de Salud") is a good source. If you do not understand Spanish, then you should enable translation features on your web browser if they are available.
Click on images to enlarge.
Posted by Diana Miskell at 1:50 PM No comments: